From build first to users first

At the Canadian Digital Service (CDS), we are excited to be working with government departments to build better services. We are also keen to share lessons we learn from these experiences to hopefully help folks with their own work.

We’re certainly not the first to do this. There are a lot of great resources out there (we’ve included some below). Taking inspiration from digital agencies who have come before us, we hope to add to this collection by sharing approaches that we’ve adopted when working in the unique space of Canadian government service delivery.

As always, we will start small and iterate often, beginning with the question we get asked most often: “Where the heck do we start?”

Simply put, a good place to begin is understanding a couple foundational pieces like, what is service design and user-centred design, how do they differ from what’s been done in the past, and what do they look like in action?

So let’s dip our toe in there.

Governments have typically approached designing a service in linear stages based on the requirements of the organization.

When one stage of a project ends, the next stage builds on top of that work until the project is done and only then is the product launched for everybody to use. If you’ve noticed the service isn’t meeting the needs of the public after it’s fully built, it can be costly and complicated to fix.

A different way is emerging where services are designed with the people who use them (the ‘users’) from the very beginning.

Methods like ‘service design’ and ‘user-centred design’ embrace this new approach. In a government context, this means improving all parts of a government service, even the hidden stuff that the public won’t ever see.

This is done first by talking to users to find out their needs, then testing ideas early and often with them. As new feedback comes up, improvements are continuously applied (known as ‘iteration’). 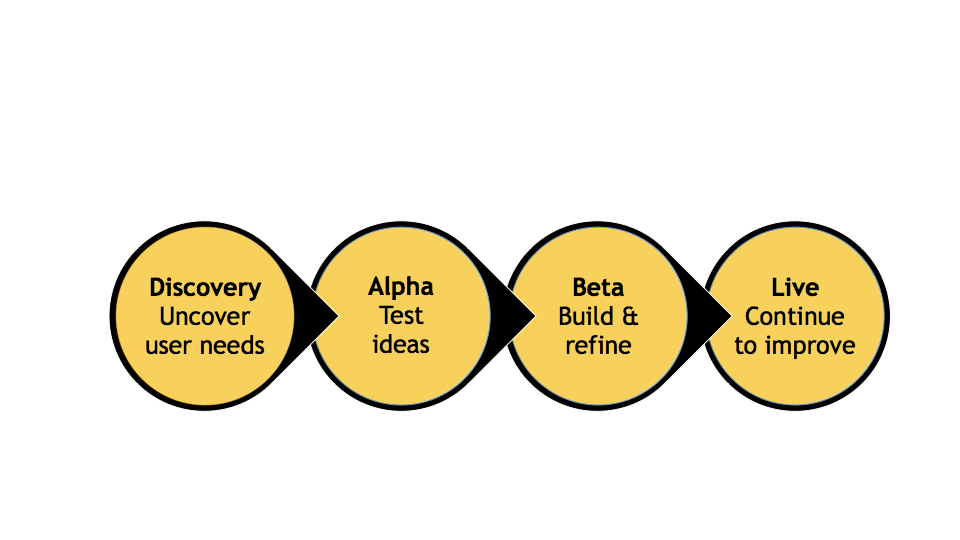 Looking deeper into the problem, who the users are, and what they need

Starting to design, build, and test the minimum viable product

It’s okay to run another alpha phase, or stop after Alpha if the product is not meeting user needs.

Taking what was learned during Alpha and building a working service

It’s okay to run another beta phase if the product is not meeting user needs. It’s also okay to stop after Beta, though less likely if you have proved the need for the product in earlier phases.

Putting the service out in the public domain, being used in real situations

At this point for CDS, we take a step back and the partner department maintains the service after Live. The partner continues to monitor analytics, test, and release new features as user needs change.

The resources will continue to grow. In the meantime, we want to hear from you. If you have feedback, or want to learn more about a particular topic, let us know!