Just enough detail: how we designed content for the COVID Alert app

When we first started work on COVID Alert, we knew one of the keys to success was trust. People would not download the app if they didn’t trust it. And we knew that the key to trust was understanding.

Most people think about virus transmission as tied to the places they’ve been and the people they were with. So, for people to trust that the app would not track them, we had to show how the app can find possible exposures without tracking movements. In other words, we had to change their way of thinking.

The first few screens a person encounters after downloading the app are crucial to building understanding and trust. Most apps have some form of “onboarding” screens – usually just 2 or 3 to introduce key features. But our onboarding needed to do much more than many apps do. We had to change people’s assumptions about how the app works.

We knew that helping people understand COVID Alert brings a huge potential for information overload. If you’ve tried to read any portion of the documentation about the Apple-Google framework the app uses, you also know this. So we had to be very careful.

The key to avoiding information overload and keeping the onboarding screens at a manageable length was giving just enough detail. It’s so tempting, when you’re trying to explain something, to explain EVERYTHING. But that’s actually counter-productive.

I think about it like the scale of a map. Some maps show the whole world and other maps show only the subway system in your city.

Subway maps serve a very specific purpose and have a very narrow amount of detail. They don’t show the parts that are above ground or underground or the topography of the landscape. They don’t even show all the streets a subway crosses. They just tell you how many stops until your stop. Or where you can get off to switch to another line.

Every time you add detail, you make it harder for people to extract what’s relevant for them. Sometimes the best value a content designer adds to a project is finding ways to avoid adding more content.

In the case of COVID Alert, we needed the equivalent scale of a subway map on a specific subway line. For example, we talk about random codes, the bits of information the app exchanges with other nearby phones. If you’ve read the framework documentation, you’ll see there are actually two sets of codes involved in communicating with other apps. But the average person doesn’t need to know that. That extra detail does not help them understand how the app works.

Spreading out the density of meaning

Among content designers, a key tenet is to use as few words as possible. But what can often get missed, especially when dealing with complex concepts, is the density of meaning. Sometimes making information clear requires adding words. This was definitely the case with COVID Alert.

While it’s true that every word needs to earn its place, sometimes a word can do too much work, in a way that actually hides meaning and makes it harder for people to understand. This can happen a lot with abstractions, acronyms and jargon.

That’s why our onboarding includes 5 screens plus 4 more optional screens. I expect most app makers would say that’s too many, but the need for understanding was too high to risk having too much density.

We also made these kinds of decisions at the level of specific words. Take the word “anonymous”. According to dictionaries, anonymous means not being identified by name. But the risks of technology and the privacy protections of COVID Alert go much deeper than that. So we made a whole screen dedicated to the app’s privacy protections.

Similarly, on the screen that starts the process for people who have tested positive, instead of simply saying something like “Anonymously upload your random codes,” we used a whole sentence just to convey the concept of anonymity: “Nobody will get any information about you or the time you were near them.”

Even a seemingly simpler word like “optional” contains a lot of information in it. So in the new functionality we rolled out just last month, we expanded “optional” to a full sentence: “You can choose not to give any details.” 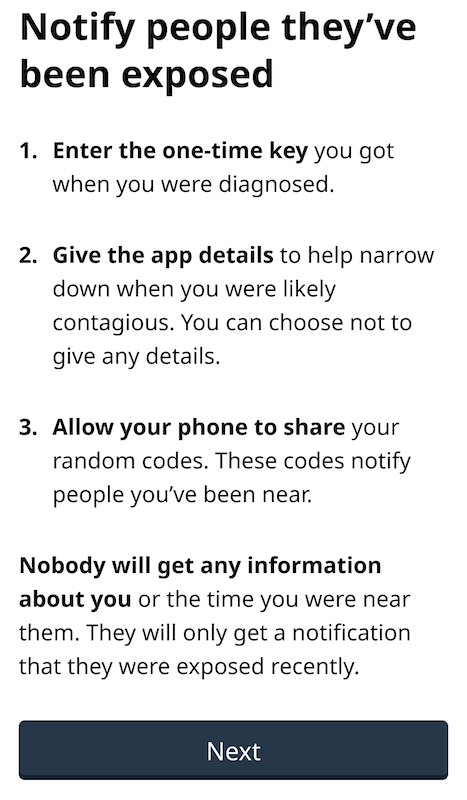 Using concrete, everyday words can feel weird — even vulnerable — when we’re so often rewarded for using jargon, abstractions and acronyms. But choosing the right level of detail and density of meaning helps people understand and trust how the app works.

The work doesn’t stop here. We need your help to continuously make COVID Alert easier to understand. Sign up to participate in future research.

: Next post
Illustrating with diversity and inclusion for the COVID Alert app
Previous post :
Communication is key: A phonetic alphabet for COVID Alert