Imagine this: you’re the starting runner in a 400m relay race. You get into the starting position, the gun goes off, and you sprint as hard as you can. As you reach that first 100m mark, you notice there’s no one to pass the baton to. Oh no. Now you have to sprint the whole relay race and keep the momentum going by yourself.

This feeling is not unlike trying to get new ideas off the ground in any organization. To do it by yourself can be painful and leave you exhausted. You, understandably, might not even have the energy or endurance to see it through to the end. But, like a relay race, turning new ideas into reality becomes easier with a team of people who are all running towards that same finish line. When you get tired or stuck, you can pass the baton to a team member whose skills and strengths can pick up from where you left off, and propel the goal forward.

On June 12, 2019, CDS held an Ask Me Anything (AMA) on Twitter in both official languages. As we learned, it took a team to reach the finish line.

On your marks. Get set. Go!

So I had this idea! “CDS should do a public AMA on Twitter.”

I joined the CDS Outreach Team a few months ago after over a decade working in media production and journalism. Working in government is a huge change for me, but I know there are incredible opportunities here to be more open and transparent, and to speak more directly with the public. I’m here to help CDS have more honest conversations about the work we do delivering digital services to make people’s lives easier.

Soon after I came on board, we launched our roadmap to delivering digital services by 2025. We had this document full of ideas to share, and we wanted honest feedback. So I thought, “What do leaders in the private sector do when they want an open dialogue with the public? They do an AMA.”

The team liked the idea for a Twitter AMA with our CEO Aaron Snow. I was excited! It felt like a bold move — something CDS had never tried before.

Then the panic set in. I had no clue how to make it happen.

I had this great kernel of an idea, but I didn’t even know if we could do a live Twitter AMA on our CDS corporate account. We’d have to figure out how to solicit questions, how to answer them in real-time, and how to do it all in both official languages — but I didn’t have the answers.

I felt paralyzed, but I didn’t want to give up on the idea just because we’d never done this before. I tried to maintain my enthusiasm and forget any perceived limitations I had of government communications. I needed help to turn this idea into a reality.

Yael had this great idea to do an AMA and I thought that while CDS had never done it before, it was worth trying. Like Yael, I am new to public service. I am, however, not new to testing ideas. She shared her challenges with me and none of them were insurmountable. We could do this. We should do this. There were a couple of key variables that made this experiment possible.

First, the Roadmap was created to kick off a conversation about digital service delivery in government. This made Twitter a natural fit. There are also civic tech communities on Reddit and YouTube, but they were ruled out as those sites aren’t accessible from many government offices.

Second, we have Élise on our team. Her ability to translate on the fly was what really made the AMA possible. Working in our official languages makes an inclusive conversation about digital government possible.

So, I set objectives, measurement methodologies, and some tactics to drive participation and allow people to ask questions a few days in advance if they were busy during the AMA.

Our Outreach team is very comfortable working in a distributed fashion. We’ve quickly become pros with Slack, Google Sheets, and Hangouts. We set it up so that Yael and Élise would be in our Ottawa office with our CEO, Aaron Snow and Sean Boots from our Policy team. Yael would triage incoming questions, Aaron and Sean would answer in a spreadsheet, then Élise would translate to French and post on our French Twitter account. In Toronto, Charlotte would do the intake of questions and post English answers. I would be in Kingston (where I always am), ready to fight fires or unblock blockers. 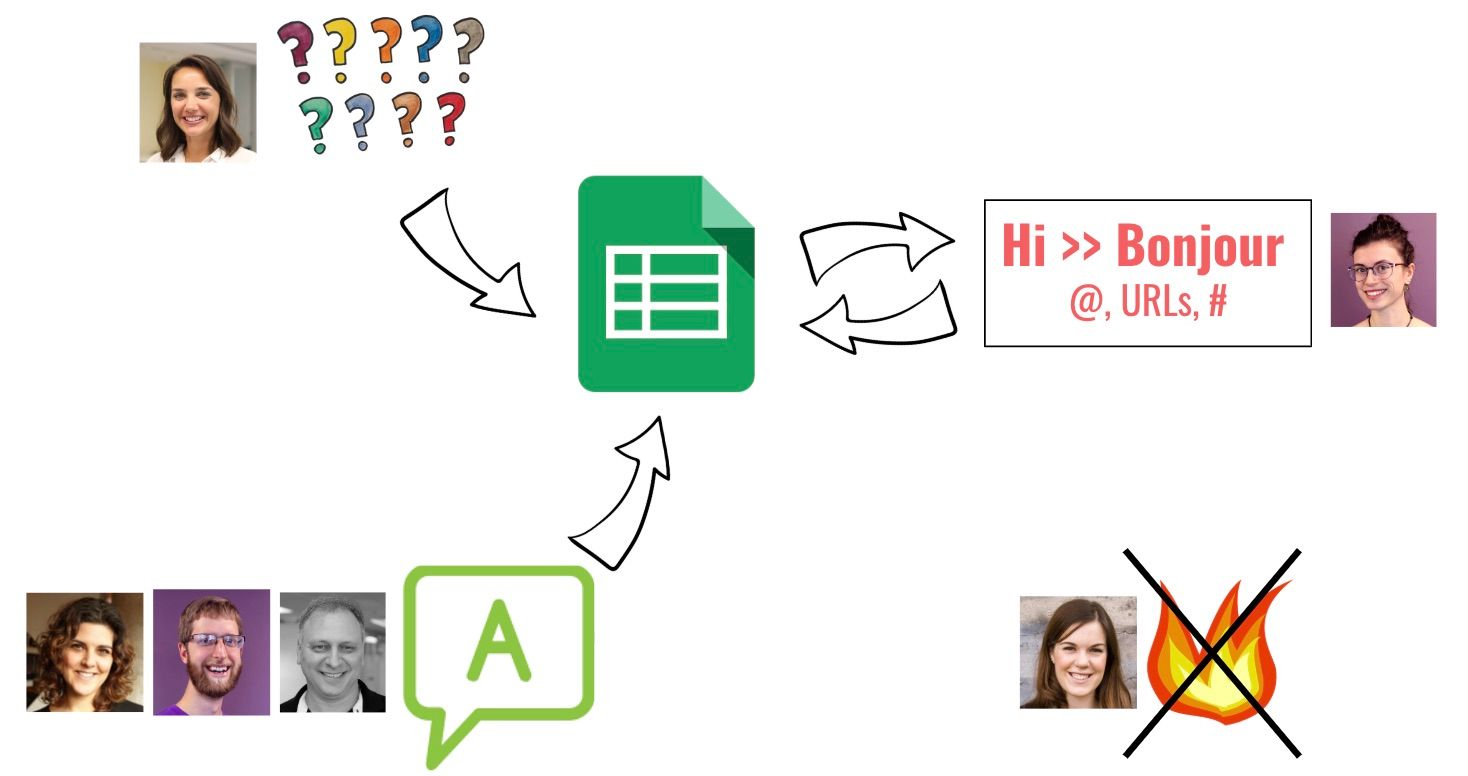 With all of that in place, I passed the baton to Charlotte to start making the AMA happen.

When Chelsea passed along the outline for the AMA, I was super excited. In my 12 months at CDS, I hadn’t seen us do something like this before. I didn’t even know we could do something like this. Helping facilitate a direct, informal, and real-time conversation with our CEO next week? Count me in!

Thanks to Chelsea and Yael, all the pieces were already lined up: the goal, the time, the place, and the people who would answer the questions. Now we needed a plan to get the word out and make this a reality. With fresh legs, I was happy to run this stretch for the team.

I wrote messages for an awareness campaign that would kick off three days before the AMA. I knew we’d use our regular channels to share messages, like Twitter, LinkedIn, and MailChimp, but I wondered if we could also try some new things.

Up until recently, we weren’t using the internal government platform GCTools because we assumed places like Twitter would be a great one-stop-shop to reach a lot of people. But our audience for this AMA was specifically public servants, and we knew GCTools is used widely by public servants. Time to experiment!

As an easy test, we posted a short message on GCTools to drive people to sign up for our newsletter. (Shameless plug: you should sign up too!) We saw about five times the number of public servants sign-up compared to when we do the same thing on our regular channels. With this data, I knew it was a high-value channel we needed to tap into as part of our AMA awareness campaign. So we did.

Okay great. We had three days of messages drafted and mapped out for LinkedIn, Twitter, MailChimp, and now GCTools. This should definitely drive awareness to the AMA and make for engaging questions. Except…this is all in English. Our audience is also French. Sure, I can order lunch in French, but I’m definitely not a translator.

Élise, I need your help!

An AMA on Twitter? It’s a perfect idea. We have a roadmap to put forward, and we want it to spark discussion. I’m in!

The truth is, I had no idea it was going to be such a sport.

Challenges excite me. And in this particular case, people would be asking questions, and I would help provide live answers in French from our CEO in the Twittersphere. It’s the kind of challenge that makes people laugh with delight and nervousness. (It may sound like a small detail, but to know that you can’t edit a tweet once it’s published changes everything!)

Chelsea and Charlotte had prepared a very effective communications plan. The first step was to translate Charlotte’s invitation messages. It was a warmup, you know? I felt comfortable because I was familiar with the roadmap after having edited it in French. I even already had a small personal glossary specific to this document with technical words and organization names.

So I was well prepared to translate live answers in French… Wait. Hold on. What’s the point of translating answers only? The english questions needed to be translated too.

And this was when I realized this was such a team sport. (I even ran out of breath at one point!) As soon as the AMA started, I quickly found out that it was impossible for me to translate the questions and answers, and also publish the answers on the French Twitter account. Fortunately, Yael was there to take over posting on French account. I say fortunately, because adding to this, I had not considered that Twitter fans would frequently insert acronyms, hyperlinks or hashtags in their questions—and I wanted to provide them in French when they existed.

Then I fell behind in the race. And that’s a good thing because it means that I had a lot of translations building up. But, because of the team effort, we still finished the race in style. (With a few aches the next day!) 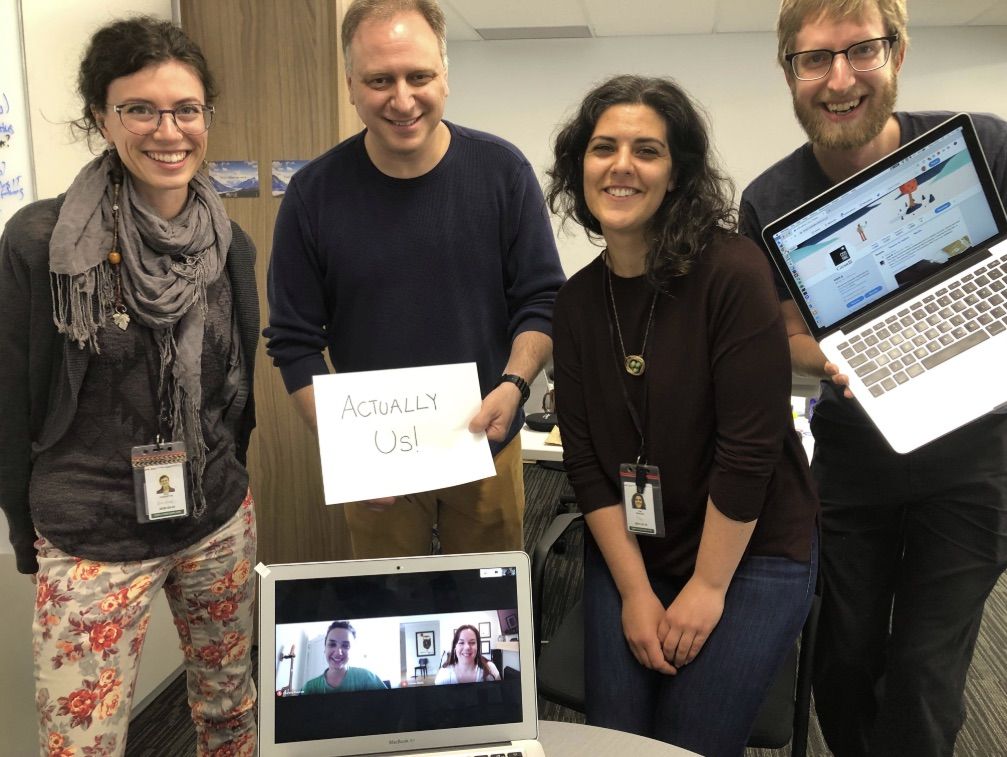 Training for the next race

We learned a lot about the power of teamwork in this experiment. Most importantly, we learned that something commonly done in private sector, like a real-time, open, and candid conversation, can indeed be done in government. We’re going to learn from our trips and stumbles and keep training for more AMAs in the future. Follow along on our Twitter account for our next race!

We take security seriously; why everyone at CDS has security keys

Product teams brainstorming during Ideation week: This might be a terrible idea, but …